BY LEWIS LEONG Welcome to IGN’s Deals, your source for the best deals on the stuff you actually want to buy. If you buy something through this post, IGN may get a share of the sale. For more, read our Terms of Use.

The launch of PlayStation VR is right around the corner but before you drop the money on the VR headset, you should know what you’re getting into. While the price of the PlayStation VR headset is advertised at $399.99, you’ll actually want to consider getting some accessories to get the full VR experience. Here’s everything you need to get started with your new PlayStation VR system.

The PlayStation VR bundle is currently sold out at most retailers, but consider this some preparation so you’ll know what you’ll need when you get a chance to order one.

Before we launch into the all the accessories you’ll want for your PS VR experience, you should know that if you don’t already own the PlayStation Camera or any Move controllers, it’s cheaper just to buy the $500 PlayStation VR Launch Bundle than to get everything individually.

The PS VR Launch Bundle includes the headset, two Move controllers, PlayStation Camera, and a VR demo disc. If you already own some of that gear, or you just can’t find the bundle in stock, you will be able to buy just the PS VR headset by its lonesome, but like the bundle, it’s currently out of stock. 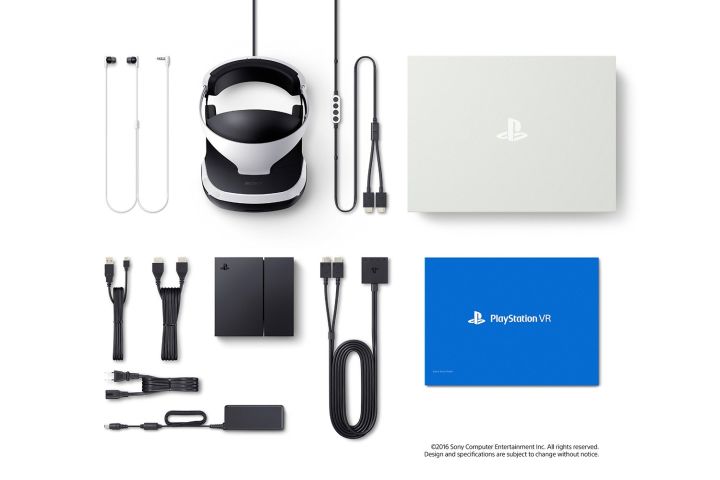 The PlayStation VR is pretty much useless without the PlayStation Camera, which costs $59.99. The camera is necessary for positional tracking, which lets you move your head and hands around in virtual reality.

What if you have the older, rectangular looking PlayStation Camera from 2014? Then you’re all set in the head tracking department, as Sony has confirmed that it works just as well as the newer model.

If you really want the full experience of using PlayStation VR, you’ll have to pick up a pair of PlayStation Move controllers. Sony just reissued them in arather pricy $100 two-pack, but luckily Amazon still has them individually for $35 each, and refurbished ones are only $27.

The PlayStation Move Controllers allow your hands to be tracked in VR, making VR much more immersive than playing with just a DualShock 4 controller. 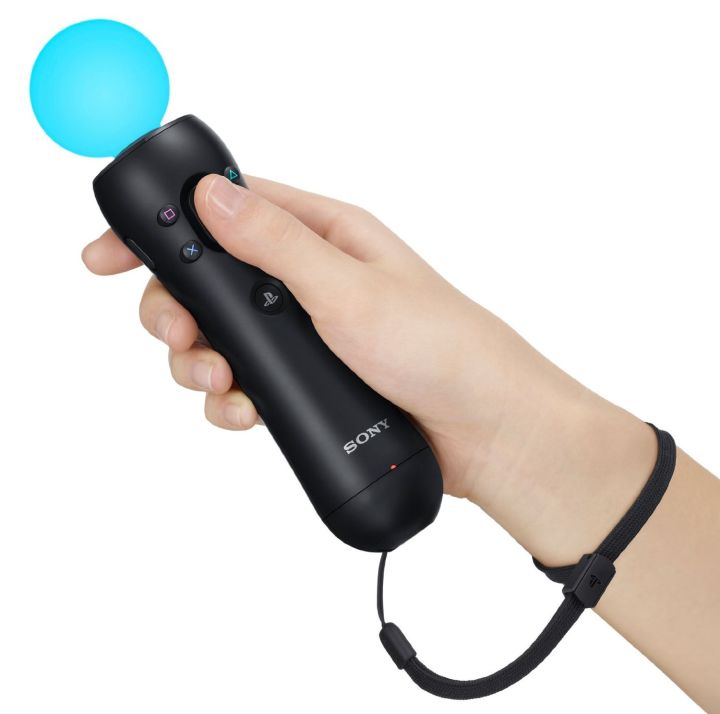 The PlayStation VR requires a jumble of accessories, so you’ll need a way to store them and keep them charged. PowerA has an awesome dock that lets you wirelessly charge two PlayStation Move controllers and a DualShock 4 controller. It also features a stand for your PlayStation VR headset on display and (hopefully) out of harm’s way. 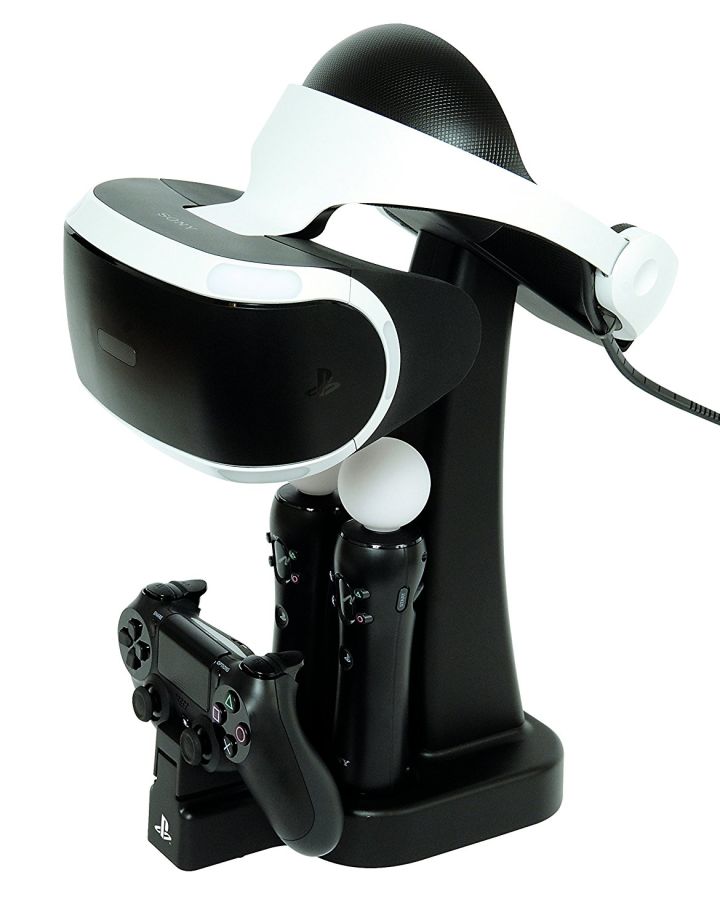 Sony and Plantronics partnered to create the Plantronics RIG 4VR, a gaming headset that’s designed to work with PlayStation VR. Positional audio is extremely important for VR, and this headset will give more immersive 3D sound. And at $69, it won’t break the bank.

Since Sony and Plantronics know you’ll be spending hours in virtual reality, the RIG 4VR was made with comfort and lightness in mind. The headphones go over your ears and the cable from the headphone is angled away from you, making it harder to accidentally wrap yourself around it. 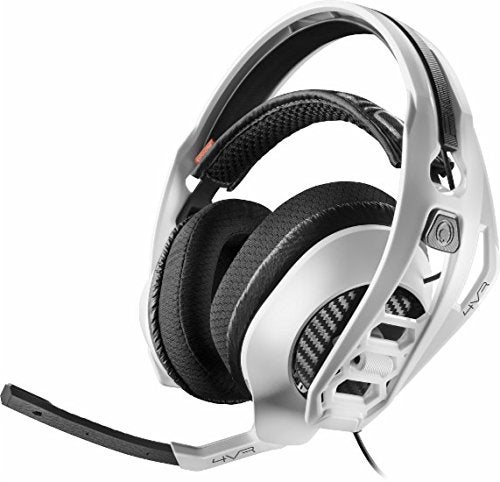 The PlayStation Aim controller was revealed at E3 2016, but it won’t be available until January 2017. It’s a bummer you won’t be able to get your hands on this VR gun accessory until next year, but you can look forward to its 1:1 precision tracking, which is extremely important for shooters. 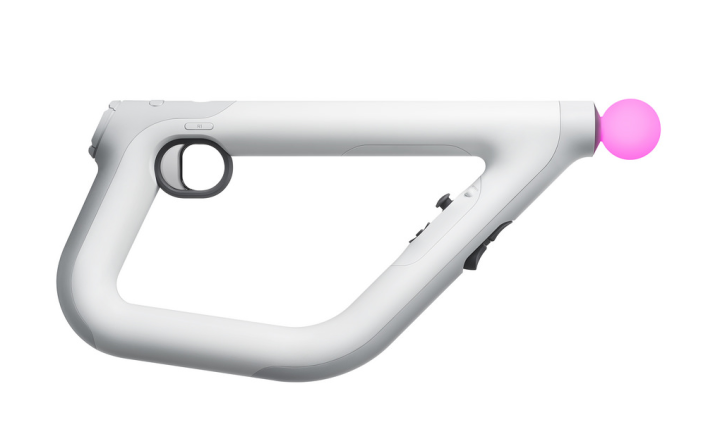 If you have dreams of being a race car driver, you’ll need a proper racing wheel for VR racing games. The Thrustmaster VG T300RS isn’t cheap, but it gives you force feedback for realistic steering feel and wheel-mounted paddle shifters. It’s designed for the PlayStation 4, so you don’t have to worry about remapping controls to work with your console. 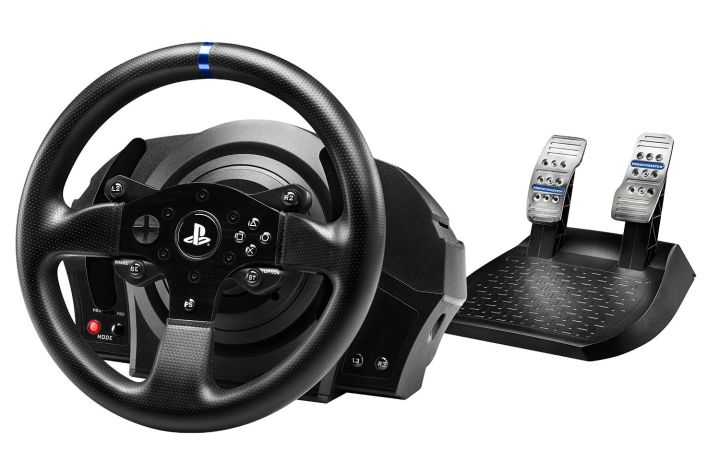 If you want a racing wheel that’s a little bit more affordable than the Thrustmaster, check out Logitech’s Driving Force G92 race wheel. It’s also designed for the PlayStation 3 and 4, so you don’t have to worry about incompatibilities. Like the Thrustmaster, the G92 features force feedback and wheel-mounted paddle shifters. There’s even a fancy shift light in the center of the steering wheel, giving you another visual indicator for when to shift. If you want to simulate driving a stick shift car, you can purchase the Driving Force Shifter accessory to use with the G92. 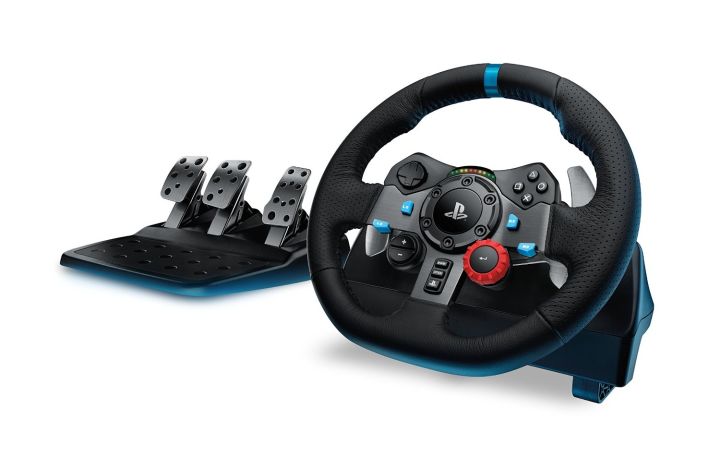 IGN: THIS $50 XBOX CONTROLLER IS ALMOST AS GOOD AS THE ELITE

Celebrate Spring with Pokémon. Check out our licensed accessories in the link below! 🖤🎮 #PlayYourWay

Don’t worry, we did the hard work of smelting this for you. The Enhanced Wireless Controller for Nintendo Switch – Pikachu Gold and Pokémon Wired Gaming Headset – Pikachu Gold are available for you to fill your coffers!
.
.
.
.
#PowerA #gaming #videogames #gamer #PlayYourWay #NintendoSwitch #Nintendo #Pikachu #Pokemon #NintendoSwitchLite #PokemonSwordShield ...

We are proud to be a sponsor for Gamers for Giving 2020 happening this weekend, March 28-29!
Join @GamersOutreach for a streaming marathon with awesome guests on @Twitch (link in their bio)
Let's help them bring games to kids in hospitals! .
.
.
.
#GFG2020 #gamers #videogames #gaming #Gamerforgiving #charity #fundraiser #gamersoutreach #twitch ...

Being home 24/7 is a dream come true for our pets! Although maybe not so much when you spend 6 hours gaming and skip the walk. Share the cuteness and send us your favorite pet gaming pic using #GamerPets 🐶😽
.
.
.
#PowerA #gaming #videogames #gamer #BlackLabsOfInstagram #FrenchiesOfInstagram #AdoptDontShop #RescuePets #MuttsOfInstagram #DogsOfInstagram #pupsofinstagram ...

"The sword of destiny has two edges. You are one of them.”
You can do this. Stay home and play games.
What monsters are you slaying while in your day-time pajamas (or nighttime? Who's keeping track anyway).
.
.
.
.
#WitcherWednesday #PowerA #gaming #videogames #gamer #GamersVsCOVID19 #gamers #NintendoSwitch #NintendoSwitchLite #Geralt #Ciri #Yennifer #Witcher3 #Quarantine2020 ...

Your consoles are so glad you are home! Share the magic of nostalgia with your quarantine buddies and show off your Mario pride with the PowerA Stealth Case Kit for Nintendo Switch Lite – Mushroom Kingdom.
.
.
.
.
#PowerA #gaming #videogames #gamer #GamersVsCOVID19 #gamers #Mario #Peach #Bowser #SuperMario #n ...

The sleekness of pro gaming brought directly to you. A one of a kind gaming experience with a one of a kind controller. Grab a PowerA FUSION Pro Wired Controller for Xbox One - Black and #PlayYourWay. .
.
.
.
#GamersVsCOVID19 #PowerA #gamer #gamers #gaming #videogames #Fusion #stayandplay #controller #pro ...